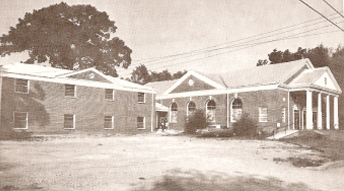 The history of Baptists in Athens is incomplete without the history of Ebenezer, formerly known as Landrum Chapel Baptist Church. The Reverend Collins Henry Lyons and others organized Landrum Chapel sometime prior to 1889, and in 1889, named it Ebenezer Baptist Church.
Historical records do not give specifics on the first three men who succeeded Reverend Lyons, the founder and pastor, but one can conclude that they helped to create a viable program. They were the Reverends J. A. Walker, J.W. Scott, and D. C.Bracy. In 1898, the Reverend J. H. Horton became the pastor. Under his leadership, in 1921, Ebenezer purchased a portion of the present property (corner of Reese and Chase Streets).

For a brief period, 1934-35, Ebenezer was under the leadership of the Reverend J.B. Reid. On the second Sunday in January, 1937, under the pastorate of the Reverend C.J. Gresham, the Ebenezer family moved to the present sanctuary. The Reverend Gresham pastored until 1952. From 1953-1979, Ebenezer had four pastors: the Reverends J.H. Sanders, Charles Stokes, William Hudson, and Wesley Griffin. The distinct leadership of each man resulted in continuous progress. The parsonage was completed under Reverend Stokes and under Rev. Sanders Ebenezer’s Trustee Board was established. New windows, a second choir stand, and new carpet was installed under the leadership of Rev. Hudson, and the L. B. Eberhardt Education wing was constructed under Rev. Griffin.

The current pastor, the Rev. Dr. Winfred M. Hope, came to Ebenezer in 1979. Under his visionary leadership, Ebenezer experienced unprecedented growth and prosperity. The results of which include the payment of the mortgage balance on the educational wing, the purchase of three vans and additional church property, the establishment of the Fellowship Center, several renovations, the addition of a steeple, a Community Ministry Center, and a debt-free church (since 1995). On the state level, Dr. Hope serves as Dean of the Congress of Christian Education of the General Missionary Convention of Georgia, Inc. and is known nationally as an outstanding Christian educator.
Information derived from Ebenezer’s records, Ebenezer’s members, especially Brother Bennie Tillman and Sister Theresa Flanagan, and information from Sister Charlotte Marshall, a historian from the First Baptist Church.