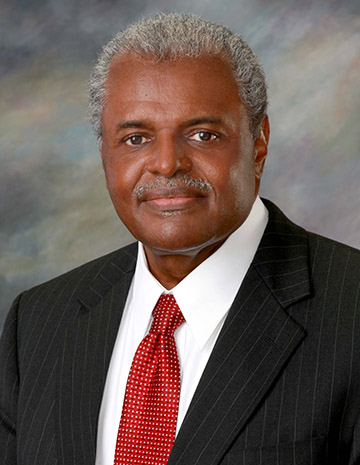 Winfred M. Hope was born to the late Reverend Robert L. Hope, Sr. and the late Mrs. Zeola Hope. He is a native of Mobile, Alabama.

He received the Bachelor of Arts in Sociology from Fort Valley State College, Fort Valley, Georgia, and the Master of Divinity from Morehouse School of Religion of the Interdenominational Theological Center, Atlanta, Georgia, and the Doctor of Ministry from San Francisco Theological Seminary, San Anselmo, California. He was awarded the Doctor of Divinity from the United Theological Seminary and Bible College in Monroe, Louisiana.

His call to the Gospel ministry afforded him many opportunities to serve. He was greatly helped and encouraged by Zion Baptist Church of Brunswick, Georgia and the Trinity Baptist Church of Fort Valley, Georgia. He pastored the Mt. Calvary Baptist Church, Cairo, Georgia for seven and half years. On August 16, 1979, Dr. Hope was called to serve the Ebenezer Baptist Church West in Athens, Georgia. As the visionary pastor for 40 years, he implemented many new ministries for children, youth, adults including Worship on Wednesday for the homeless, the Community Ministry Center a 501c3 to help the needy and the University of Georgia Foster Student/Parent Program to provide a home away from home for students attending the University of Georgia. Additionally, Ebenezer West under the leadership of Pastor Hope has partnered with First Presbyterian Church of Athens to build 3 Habitat for Humanity Homes in Athens, Georgia.

Pastor Hope served as a member of the Clarke County Board of Education 1984-1986 and has received numerous past awards for his dedicated service to the Athens Community from notable organizations such as the Girl Scouts of America, Alpha Phi Alpha Fraternity, Inc., Alpha Kappa Alpha Sorority, Inc., Omega Psi Phi Fraternity, Inc., Toastmasters International District #14. On April 7, 2017, Pastor Hope received the Banks, Pierre, Rutland, Bellamy Social and Behavioral Sciences Award at the 36th Annual Social Science Colloquium Luncheon from his college alma mater, Fort Valley State University as an outstanding graduate of the Social and Behavioral Science Department. November 29, 2017, Pastor Hope was recognized and honored by the Sunday School Publishing Board of the National Baptist Convention, USA Inc. for dedicated service in recognition of the milestones achieved for his assistance in helping to grow the SSPB Convention. In January 2018 at the Martin Luther King, Jr. Freedom Breakfast held on the campus of the University of Georgia, Pastor Hope received the 2018 President’s Fulfilling the Dream Award. In May 2019, the Morehouse School of Religion conferred upon Pastor Hope the Honorary Doctorate Degree of Religion. On August 25, 2019, Pastor Hope retired as Senior Pastor of Ebenezer West, and was presented with the honor of Pastor Emeritus for his many years of dedicated and loving service to Ebenezer West and community.

In March 2017, Pastor Hope was invited to give the opening prayer and benediction for the reinternment ceremony held at the Oconee Hill Cemetery for the 105 human (slave) remains found under the University of Georgia Baldwin Hall in November 2015.

He has distinguished himself as a faithful pastor, known nationally and around the world as the “demonstrating” preacher and first-class motivational teacher. His audiences describe him in these words, “For others, you hear them preach, for Dr. Hope, you have to see him preach.”

Dr. Hope’s passion and vision for mission was fulfilled in June 2014, when he and 16 members from Ebenezer Baptist Church West travelled to Kenya, Africa to engage in an ongoing partnership with the St. Carl Home of the Champions School and Orphanage in Kisii, Kenya where 117 orphans ages 3-17 live and attend school. The mission trip to St. Carl resulted in significant upgrades and renovations since 2014 to the existing school facilities which included new beds, mattresses, new concrete steps, veranda, new windows, doors, as well as providing on-site teaching/preaching, medical care/wellness check-up, and providing new uniforms/shoes, school supplies and monthly food stipends to St. Carl since 2014. Pastor Emeritus Hope has preached and taught laymen and preachers in the Kisii, Kenya region for more than 5+ years helping to grow and lay strong Baptist and Biblical foundations in this region of Africa.

He is married to Betty Smith Hope, formerly of Dublin, Georgia. She is a graduate of Fort Valley State College and is a retired Early Childhood teacher from the Clarke County School District. Rev. and Mrs. Hope are the proud parents of two lovely daughters: Helen Yvonne (Marcus, son-in-law) Kimbrough of Charlotte, North Carolina and Tracey Yvette (Ulysses, son-in-law) Haynes of Birmingham, Alabama. They are the proud grandparents of Austin and Avery Kimbrough.